IntelBrief: The Militarization of American Police 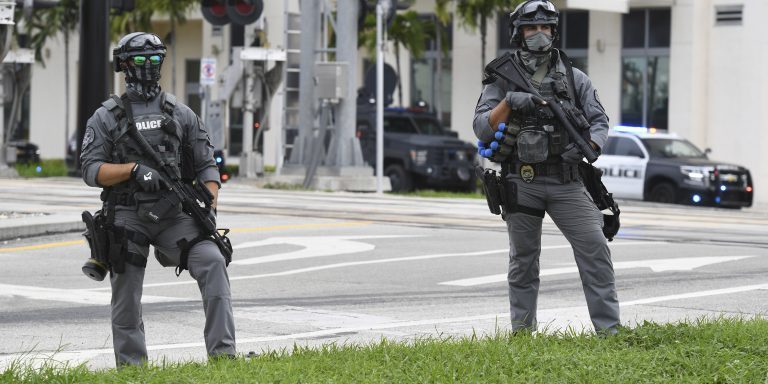 For many Americans, the ongoing protests and demonstrations against police brutality was perhaps their first clear look at just how militarized policing has become in the United States. Yet for others, particularly African-Americans and others living in minority communities, the conflation of police work with military operations has long been obvious. The so-called ‘War on Crime’ has been a catastrophe on many levels, eroding the social fabric of local communities and breeding a deep distrust between law enforcement officers and those they are supposed to serve. The result has been counterproductive, to say the least—a philosophy of police work in which the police are essentially, and in some cases literally, at war with the people whom they swore an oath to protect. This narrative of ‘us versus them,’ a ‘warrior mindset’ and of the police as a ‘thin blue line’ holding back the overwhelming tide of criminality drives police work and shapes most of the interactions police have with people they should be considering their neighbors. It evokes images of Kandahar on the streets of Kansas City.

Since the late 1990s, the U.S. government has provided more than 6 billion dollars in surplus or outdated military gear to more than 8,000 local police departments. Handled by the Defense Logistics Agency (DLA) through the ‘1033 Program,’ police departments large and small can obtain military equipment, including armored vehicles like Mine-Resistant Ambush Protected vehicles (MRAPs), as well as grenade launchers. Police departments and the city governments that oversee them have stressed that these equipment transfers were ‘free,’ but in actuality the costs have been staggering—mostly in the damage to communities in which these weapons are deployed. There is also a clear impact on the police and the department’s mindset of operating within the community as if it were fighting an urban counterinsurgency. When police departments have such equipment, they tend to find ways to use it, to justify the upkeep and maintenance as well as to demonstrate to the public how the police intend to win the ‘war.’

The ‘War on Crime’ is just another martial attempt to deal with social challenges, along with the ‘War on Drugs’ and the ‘War on Poverty,’ metaphors that attempt to overly simplify complex concepts and in doing so, fall far short of effectively addressing these issues. The ‘War on Crime,’ by almost any metric, has been an unmitigated bipartisan disaster, with politicians at every level from City Hall to the White House eager to show just how tough they were against what in reality has been violent crime rates that have been falling for decades. Police departments have fully embraced the concept of this war and train their officers to have a ‘warrior mindset’ as they patrol American neighborhoods in which most of the police do not live or spend any time outside of work. Many police departments have gradually morphed into quasi-paramilitary organizations, in both word and deed, as reflected by everything from training to their uniforms, which include outer load-bearing vests reminiscent of U.S. soldiers in combat zones. The necessary safety equipment, such as ballistic vests, are designed for officer safety but the trend for police departments after 2001 and the beginning of the ‘War on Terror’—has been to expand officer safety to such an extent that the safety of the public is an afterthought.

Pressure is building slowly in Congress to limit military equipment transfers under the 1033 Program. There is some bipartisan support to prohibit offensive weapons and to restrict the program to items such as medical supplies and ballistic vests and shields. Any reform would have to clear the Senate Armed Services Committee (SASC), which retains oversight of the program. Supporters of the program believe that the police need such equipment, again stressing officer safety and the idea of a war in American streets. The use of military equipment against protesters—not to be confused with rioters—has generated concern and outrage but it remains unclear if such outrage will result in meaningful reform, especially reform that goes beyond limiting the weapons of war and begins to help reframe the mindset of police as warriors. Police work in America is intensely local. Federal guidelines and limits on military equipment are necessary, but in and of themselves an insufficient step, in beginning the long overdue process of reforming the police profession.