Intelbrief / IntelBrief: China Strives to Undermine the Predominance of the U.S. Dollar

IntelBrief: China Strives to Undermine the Predominance of the U.S. Dollar 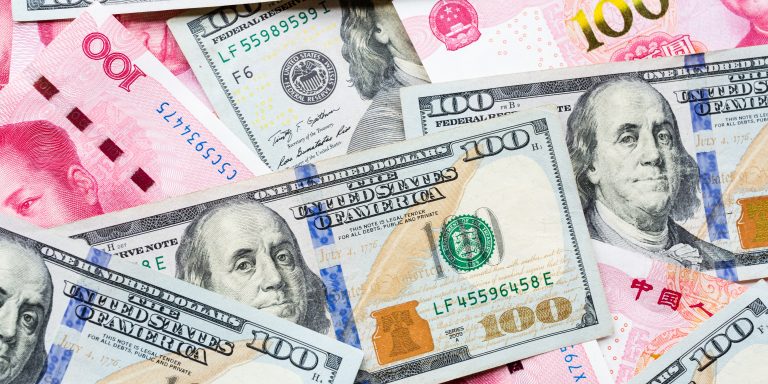 As of the beginning of 2023, China, the primary global economic and strategic competitor of the United States, is seeking to undo the nearly eight-decade pre-eminence of the U.S dollar as the main global reserve currency and the currency in which energy transactions are usually denominated. The U.S. dollar has been used for worldwide oil and gas purchases since the end of World War II when the United States and the Kingdom of Saudi Arabia began a longstanding strategic partnership despite their cultural, religious, ideological, and political differences. The Kingdom’s decision to partner with the United States was likely predicated on the U.S. emergence as the world’s leading power after the Axis powers were defeated in the war and Europe and much of the Soviet Union – physically and economically - lay devastated from the global conflict.

The role of the U.S. dollar as the world’s most prominent reserve currency gives Washington significant foreign policy leverage – clout that has drawn objections, resistance, and counteractions by regimes resentful of what they see as a U.S. foreign policy that is meddlesome and overly muscular. Global central banks outside the United States generally do not hold enough U.S. dollars to complete large transactions denominated in dollars, such as those for oil and gas contracts. U.S. sanctions, in general, exert leverage by denying the companies incorporated in targeted countries access to the U.S. financial system – thus denying foreign companies the vast dollar liquidity needed to conduct large dollar transactions. The erosion of the prominent place of the U.S. dollar in world trade would, directly and materially, reduce Washington’s ability to use economic sanctions as a key foreign policy tool. The erosion of the global role of the U.S. dollar might also reduce the ability of the U.S. Federal Reserve to use its policy tools to calibrate the strength of the U.S. economy.

Whereas in recent years, Iran, North Korea, Venezuela, Cuba, various global pariahs such as the Assad regime of Syria, and lately Russia, have been the primary targets of U.S. sanctions, China’s leaders currently consider their country to be in the crosshairs of U.S. sanctions policy. Over the past five years, Washington has been imposing sanctions on China’s energy traders for purchases of Iranian oil, restricting the sale of advanced computer chips and other technology to China, and undertaking other sanctions-related measures to deter China from spying on U.S. universities, corporations, and the U.S. government. Some U.S. leaders advocate banning entirely from the United States the social media application “TikTok,” which is owned by the Chinese firm ByteDance, because of the potential for Chinese authorities to collect and utilize data on U.S. users of the application.

Beijing’s counter to what it sees as an increasingly aggressive U.S. policy consists, in part, of efforts to promote the use of China’s currency, the yuan (renminbi), for use in energy transactions. China, the world’s largest net crude oil importer since 2017 - when it surpassed the increasingly energy self-sufficient United States – has steadily been using the yuan to purchase oil and liquefied natural gas (LNG) from Iran, Venezuela, Russia, and parts of Africa. Assessing that China is accelerating efforts to broaden the global use of the yuan, Credit Suisse analyst Zoltan Pozsar has noted that PRC President Xi Jinping’s mid-December visit to Saudi Arabia, which included meetings with other leaders of the Gulf Cooperation Council (GCC: Saudi Arabia, Kuwait, United Arab Emirates, Qatar, Bahrain, and Oman), marked “the birth of the petroyuan” – a reference to the slang term “petrodollars” (the use of the dollar in energy transactions). The Credit Suisse analysis cited President Xi’s announcement that, over the next three to five years, China would not only dramatically increase energy imports from GCC countries, but also potentially forge deals with GCC countries to develop energy resources in the South China Sea and invest in refineries, chemicals, and plastics. Beijing reportedly intends that all its energy deals with GCC states be paid for in yuan, on the Shanghai Petroleum and Natural Gas Exchange, as early as 2025. According to Pozsar, “China wants to rewrite the rules of the global energy market,” as part of a larger effort to counter the U.S. “weaponization” of dollar foreign exchange reserves following Russia’s invasion of Ukraine.

The analysis suggests that President Xi’s visit to Saudi Arabia sought to advance objectives beyond advertising China as a potential strategic alternative to the United States. Xi’s trip came at a time of heightened tensions between the United States and de-facto Saudi leader Mohammad bin Salman (MBS) over the Saudi role in a decision by global oil exporters to cut production, and appeared intended to advance China’s role as a key player in the region. Yet, since the trip, reports suggest that U.S. and Saudi leaders have sought to ease tensions through joint defense planning and discussions on how to jointly counter the threat from Iran.

The major question facing U.S. leaders is whether Beijing might succeed in undermining the global role of the U.S. dollar. According to the BP Statistical Review of World Energy 2021, Russia, Iran, and Venezuela account for roughly 35 percent of the world’s proven oil reserves, and all of them are selling oil to China at a steep discount – a flow that is advancing China’s efforts to promote the use of the yuan. The GCC countries - the target of the most recent Chinese efforts to denominate oil purchases in China’s currency - account for around 30 percent of proven oil reserves. Around 10 percent of proven world reserves are in north and west Africa and Indonesia - regions influenced by both Moscow and Beijing. On the other hand, skeptics of Beijing’s approach correctly note that past efforts to undermine the use of the U.S. dollar – including denominating energy transactions in euros and other currencies – have had minimal success. The U.S. dollar remains, by a large margin, the preponderant global reserve currency. The GCC states remain key U.S. strategic partners that continue to use the dollar in energy transactions and understand expanding the use of the yuan would offend Washington. Beijing’s doubters also point out that, as an authoritarian state, China doesn’t enjoy the same level of global trust that the United States does, making other countries unlikely to want to do business in the yuan. And, China’s economic growth and political stability have been challenged by Beijing’s “zero-Covid” policies, which Xi’s regime dropped in December in the face of widespread anti-government demonstrations. Still, U.S. leaders are undoubtedly concerned that a dedicated effort by a large economic competitor such as China could conceivably mark the beginning of the end of the long era of the U.S. financial system’s dominance in the global economy.