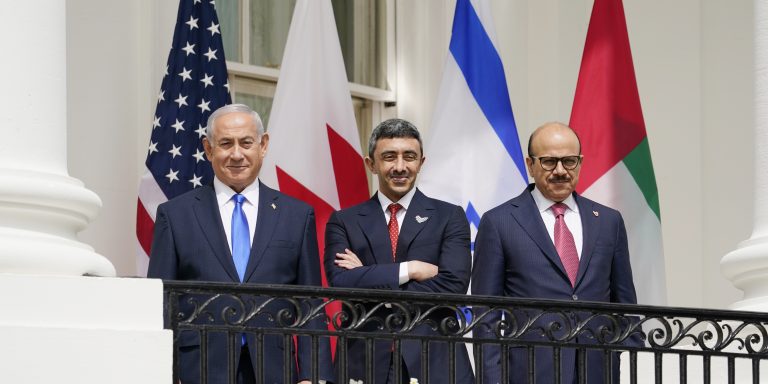 At the White House on September 15, 2020, the United States, Israel, the United Arab Emirates (UAE), and Bahrain signed the “Abraham Accords”, a joint statement pledging the normalization of relations between the signing parties. The Accords grew out of the August 2020 announcement that the UAE and Israel had agreed to establish formal diplomatic relations, the first public normalization of relations between an Arab country and Israel since the 1994 Israel-Jordan peace treaty. In the weeks following the 2020 White House signing, two other Arab states—Morocco and Sudan—agreed to join the Accords and take similar steps to develop formal ties with Israel. The Accords followed a decade-long process of increasingly close but informal security and cultural ties between Israel and several Arab states fostered to contain Iran and combat regional extremist groups.

Additionally, in March 2021, the Biden administration certified to the U.S. Congress that it had restored Sudan's sovereign immunities pursuant to the Sudan Claims Resolution Act enacted in December 2020. That legislation paved the way for Sudan to settle claims from U.S. victims of acts of terrorism that were allegedly linked, to some extent, to Sudan, including: the 1998 bombings at the U.S. embassies in Tanzania and Kenya; the 2000 attack on the USS Cole; and the murder of a USAID employee in Khartoum. The claims settlement was a condition of the Trump administration’s removal of Sudan from the list of state sponsors of terrorism, which was in turn an incentive provided to Sudan to join the Abraham Accords. Bahrain did not request or receive any specific benefits for joining the Accords, but it remains a close U.S. ally, particularly with respect to hosting U.S. naval operations in the Gulf.

The Biden administration’s acceptance, but not warm embrace, of the Abraham Accords virtually guarantees that no other Arab state will join the Accords in the foreseeable future. The Administration appears unwilling to offer any specific incentives to other states that reportedly have considered joining the pact, including the Sultanate of Oman. Qatar and Kuwait have rejected joining the Accords unless there is clear progress toward a negotiated Israeli-Palestinian peace settlement. Saudi Arabia was the author of the 2002 Arab peace initiative that called on the Arab world to normalize relations with Israel only if a “just settlement” between Israel and the Palestinians is reached, a position from which they cannot they cannot easily deviate. The Saudi government faces far stronger domestic opposition than do the leaders of the smaller Gulf states, constraining the ability of Saudi leadership to act contrary to the Kingdom’s long-established policies. And, since the Accords were signed in 2020, the May 2021 conflict between Israel and Hamas returned the Palestinian issue to the forefront of Arab discussion and bolstered the popularity of Hamas in the Arab world significantly. The conflict placed the Arab parties to the Accords on the defensive and increased the risk of backlash to any Arab leader who might consider a separate peace agreement with Israel. The strategic effect and legacy of the Abraham Accords is likely to remain minimal, at least throughout the Biden administration, though its preservation is a signal of the enduring U.S.-Israel partnership.